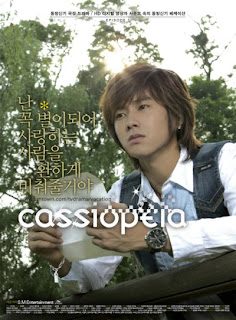 Of all the shorts in the omnibus, this is just so-so for me. Maybe it’s the run-of-the-mill plot, maybe its U-Know’s ghostly white make-up and frizzy hair, I dunno…but it didn’t stand out much. All it did was deliver a couple of good laughs.

It’s about U-Know, who has been getting fan mails from an ardent Cassiopeia who is terminally ill. Her dying wish is to meet him. However, a letter arrives informing him that she has died of leukemia.

Saddened, the leader of TVXQ decides to spend his break looking into the matter. When he arrives at the hospital, he is told by the doctor that the girl, Soo-yun (Go Eun-ah) is still very much alive.

When confronted, Soo-yun says that she did what she did for the sake of her elder sister Jung-ah (Woo Kyeong-ha), who is in a catatonic state after an accident. 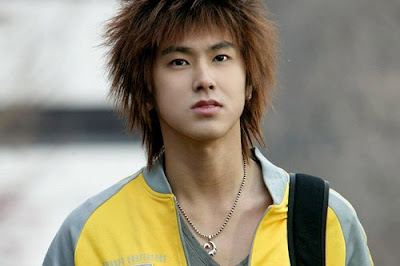 Frizzy: ‘What, you haven’t done it before? Dude, just stick
your head in the dryer – it works all the time.’


Now that a living, breathing pop idol is in the neighbourhood, Soo-yun asks him to stay and perform for Jung-ah’s coming birthday celebration. He obliges and the pair develops a friendship that blossoms into a possible romance – every Cassiopeia’s fantasy, right?

I guess this is the main selling point of the drama – turning every Cassiopeia’s fantasy into “reality”. However, we can’t have the hero tied down with a chick now, can we? Cassiopeias will go ballistic and pan the drama left, right and centre even if U-Know delivered an Oscar-worthy performance. 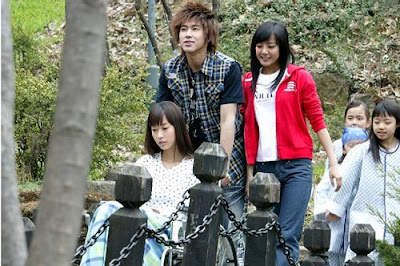 Take a walk: U-Know spends some precious time with
Soo-yun (in red, Go Eun-ah) and
Jung-ah (in wheelchair, Woo Kyeong-ha)


To balance things out, the episode unfolds like a typical Korean melodrama – complete with a miraculous recovery and an “unexpected” death.

With that said, I’m sure fans will lap this up as it shows a larger than life idol meeting and becoming close to a fan.

Stretched thin while preparing for their upcoming concert, the five boys of TVXQ/ DBSK are given a break from each other for two weeks.

Their vacations see them heading out on their own (except Xiah and Max) and Cassiopeia is U-Know Yunho’s story of meeting and developing a friendship with a fan. 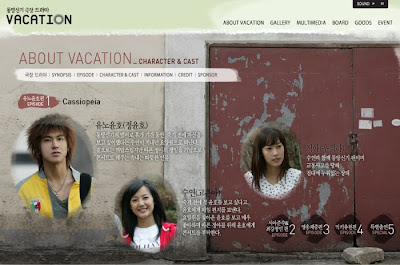 This is part of a four-episode omnibus. The other episodes are Beautiful Life, The Way U Are and Eternal.