K-popped!is given the opportunity to ask the 31-year-old, who plays EMT Eddie Choi in the series, some mind-boggling questions (OK, maybe they aren’t that mind-boggling).

But first, here’s a little background on Mr. Tee. 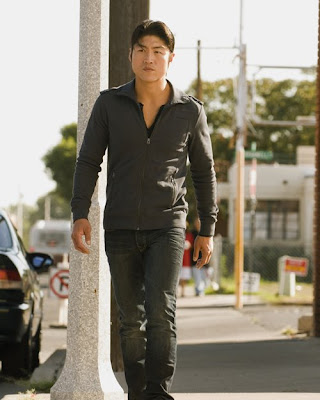 You’ve seen him display his skills behind the wheel as D.K. or Drift King in the Justin Lin-directed action/thriller The Fast and The Furious: Tokyo Drift (2006).

In the following year, Tee gave a memorable comic performance in another Justin Lin flick, Finishing the Game: The Search for a New Bruce Lee. 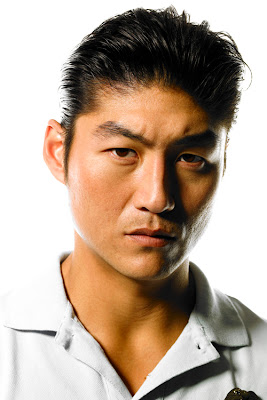 Actor/ producer: Tee is starring in and producing the
film in which Kang Hye-jung (Old Boy) is making her
Hollywood debut

The University of California, Berkeley graduate is currently filming Wedding Palace with Kang Hye-Jung (Old Boy, Welcome to Dongmakgol). Tee is starring in and producing the rom-com in which Kang is making her Hollywood debut! 🙂

Tee has also appeared in flicks such as Fun With Dick and Jane, We Were Soldiers and Austin Powers: Goldmember. His TV appearances include Grey’s Anatomy, The Unit, Entourage and Monk.

In Crash – a TV spin-off of the Oscar-winning film about racial tensions in Los Angeles – Tee’s Eddie Choi is caught between the Korean gang world he left behind and the mainstream medical world where he wants to fit in.

Tell us about your character Eddie Choi in the drama series.

Eddie Choi immigrated here (Los Angeles) with his family as a young child and tried to fit in, but ended up running with a Korean gang. He was scared straight after being sentenced to a few months in juvie, and is back on the path to becoming a doctor. However, he can’t seem to catch a break.

As an EMT, he’s doing the right thing, but he doesn’t fit in with his current or former life.

The greatest thing about Eddie as a character is that he’s not just a one-note type of guy that we typically see in a character like this. Throughout my career, I have played many stereotypes of either the foreigner, bad guy, gangster, or techie geek, but now I am honored to be playing and creating one of the most complex and well-rounded characters I have ever portrayed. 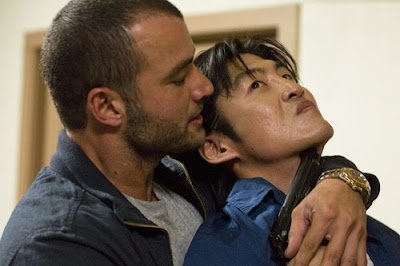 Where do you draw your inspiration for the character?

Eddie Choi is someone I relate to and a character that my heart and soul goes out to. I found so many inspiring qualities in Eddie that I live by in my own life. Eddie is a man of perseverance, good work ethic, pride, and loyalty… almost to a fault.

His past may have led him through the wrong paths, but deep inside, he is a character of great honor and integrity. His circumstances may be different (growing up in a gang environment) but he was like me and any other kid – just trying to find himself and be accepted.

Do you think Crash is more or less an accurate portrayal of the racial tension in Los Angeles? How so?

I think our TV series Crash is a closer depiction to “race,” instead of “racism,” in Los Angeles. The greatest thing about living in LA is the cultural diversity. I think this is what makes Crash so great. It’s really about the characters’ lives that we follow. It’s their differences and diversities that make them so interesting.

To me, LA is not a melting pot but a tossed salad. It’s a bunch of individuals in a bowl tossed together. We don’t necessarily meld or blend into one like a melting pot of soup but we all have our own diverse individualities – tossed in the bowl that is LA and Crash is an accurate portrayal of that.

You are of Korean-Japanese descent, which are you more in touch with, your Korean or Japanese side?

I think I can say that I am more in touch with my Korean side because of my upbringing and strong Korean Mom. Also, for the past 10 years, I have been taking care of my Korean Grandmother more…so their Korean traits have influenced me in my life.

However, that still doesn’t take anything away from my Japanese roots. I think both cultures have instilled in me the morals, values, customs and traditions I live by. I’m in touch with both sides…it’s not a sense of “meaning” but a sense of “being” that I am proud of. 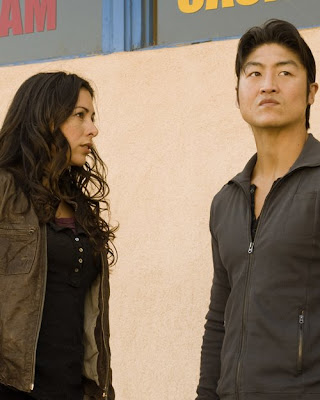 Something smells fishy: ‘Yeah Bebe (Arlene Tur, left),
I get it too…the stench is coming from over there.’

You speak four languages – Korean, Japanese, Chinese and English. Being the multi-linguist that you are, do you think you have better chances at seducing women than the average guy?

Let me set this straight: Yes, I speak Japanese, Korean and English but I do not speak Chinese. I wish I did…and am not sure where that rumor came from.

Also, I’m not really here to talk about seducing women let alone using my languages to help me in that matter. I’d like to think I treat women with respect, integrity, dignity and class. And if having the ability to speak other languages helps me in that regard, then so be it.

To any guy out there learning a language to seduce a woman, learn to treat them with sincerity first. It will go a lot farther than learning to say “You’re hot” in another language. 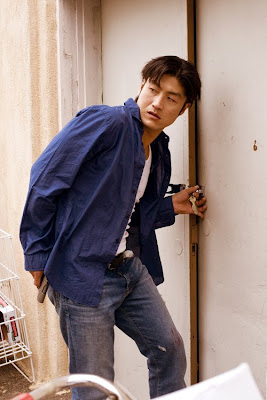 Sneaking about: Eddie (Tee) practices for his Santa Claus
stint this coming Christmas

Hye-kung has been a joy to work with. She is so sweet and incredibly talented…everyday working with her is a delight. We have such a good time on set its hard to pick just one. The story itself is so funny that many of our funniest moments are while acting. Hopefully you – fans and readers – will soon see in late 2009!

Have you been to Malaysia? If yes, when and what were you here for? If no, would you like to visit and have dinner with the K-popped! Trio?

I have never been to Malaysia but would love to go and if the K-popped! Trio is inviting… I’d be happy to join you for dinner!… Your treat, riiiiiiiiiiiight? 😉

Huh? *cough* Moving right along :-P. Why should K-popped! readers tune in to Crash on Starz when they can very well watch Lee Hyori or Rain on YouTube?

Crash is something original and ground breaking. The stories and characters are so well written and portrayed. We have the best directors, producers, writers, crew and talent onboard.

Also, we have a great network like STARZ supporting us and allowing us to really push the envelope, and taking the series to new heights. Anyone would be missing out if they didn’t check it out!

To to all K-popped! readers out there… you have to check out what you’ve been missing and know “you can’t look away.”

Thank you for the interview Brian. We wish you and the series all the best :-).

To our Malaysian readers, sorry but Crash ain’t showing on the local telly. Readers from the US of A, you can tune in to the show every Friday at 10pm on Starz.