Merry Christmas everyone! How are you celebrating Christmas this year? Since you’re here at K-popped!, allow me to reminisce about the time the Trio went to the Yoido Full Gospel Church on Nov 9 :-).

It was a lazy Sunday morning when we dragged ourselves out of bed to make our way to Yoido. Apart from visiting Yoido Full Gospel Church, we had other plans such as checking out the 63 Building and later, heading down to the Noryangjin Fisheries Wholesale Market :-).

A friend suggested that we visit one of the many broadcasting stations, such as KBS, SBS and MBC which were all located in the area. But on that day, we decided against waiting in line for a show as the sights and sounds of Yoido beckoned. 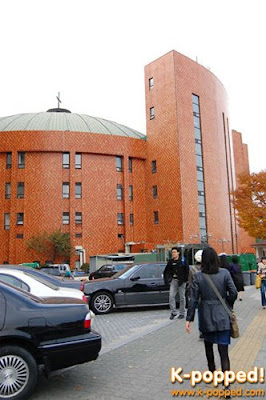 Get me to the church on time!: OK, OK we were a
little late getting there.

We started our journey at Jongnosam(3) -ga, as we were staying at the Doulos Hotel. Happily, we hopped onto a near-empty subway. Sharing the subway car with us were two African men, who were still on the subway when we got off at the Yoinaru station.

The K-popped! Trio then walked the rest of the way to church. It took us about 10 to 15 minutes of walking/ sightseeing as Orchid and Rooster were eagerly snapping pictures along the way.

The Yoido Full Gospel Church was HUGE. We made a beeline for the information counter and asked the man for directions to the 11am service. He escorted us to the English section for foreigners. We were given headsets to listen to the English translator as the service was fully conducted in Korean. 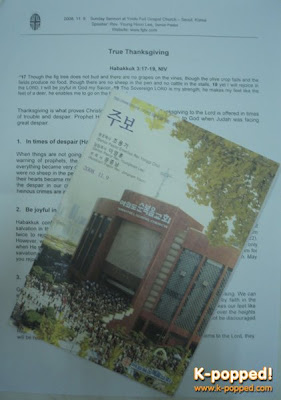 Aids: The notes and bulletin we received

Guess who we saw at church? The same African men who were in the subway with us! How did they get there so fast? Did we get off at the wrong stop :-P?

The Trio were seated at one of the balconies, sandwiched between the African men (on our right) and a white guy (on our left). Ah, such a “We Are the World” moment – a Caucasian, three Chinese and two Africans – attending service in a Korean church. I live for moments like these :-).

Anyway, we later learned that the guys, who beamed into church ahead of us, were studying in Seoul and attend service at the church every Sunday. 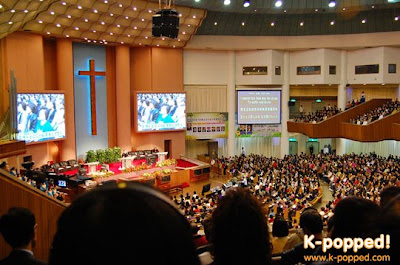 Music fills the air: Churchgoers singing along with the choir

The church was packed and had an orchestra hall-like feel to it. The pipe organ was HUGE and the team of people serving (ushers, choir, AV team) were many. The ushers were an interesting sight to behold as the men were smartly dressed in white jackets and black pants while the women were in their white and dark blue hanboks.

Personally, it was an amazing experience to attend service at Rev. Cho Yonggi’s church, which Encyclopedia Britannica cites as the church with the world’s largest congregation.

Since we attended the 3rd service of the day, we missed founder Rev. Cho’s message. He spoke in the 2nd service. Instead, we sat in for Senior Pastor Rev. Lee Young-hoon’s message on True Thanksgiving :-).

After service, a friendly usher invited us to an introduction of the church through a video screening for foreigners. We kindly declined…I would have gone if we were in Seoul under more permanent circumstances, but since we were only passing through, we turned the offer down.

As we were leaving, the ushers – both men and women – stood at the landing of the staircase and bid everyone coming down the stairs farewell…complete with mini-bows! Kewl.

Outside the Yoido Full Gospel Church, we saw the crowd waiting to get in for the next service. The ushers had to prevent them from coming in and let us leave first. Man, I’ve never seen so many people so eager to go to church before! I’m impressed. 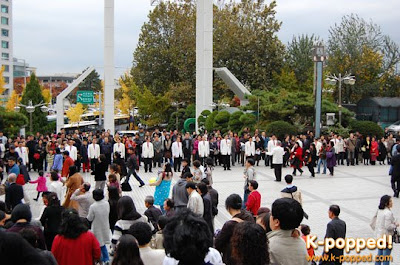 On guard: Ushers (in black and white) letting us leave first before
allowing the crowd attending the following service in!

Do you trust me?

This incident would probably not happen in Malaysia.

So it was after church and Orchid and I needed to go to the ladies. The church-leaving crowd was heading to Hotel Lexington, which was located opposite the church, so we followed. True enough, there was a line at the ladies’ toilet…all churchgoers (question: the church doesn’t have toilets?). 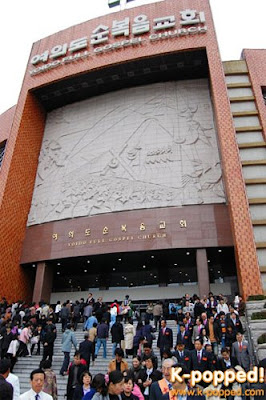 The washroom started to empty and since I was still waiting, a Korean ajumma who just stepped out of the toilet asked me – a total stranger – to hold her handbag so she could wash her hands. And she took her own sweet time to do it – lathering up her hands, looking for paper towerls, drying her hands on paper towels and such.

Hey Lady, you know I could be nicknamed Super-Fast Hands back home, slip my hand into your purse and help myself to some of your Korean won right? Or run away with your handbag…but then again I wouldn’t get far as the crowd trickling into the hotel might pummel me to death real quick. Thou shalt not steal, no?

I’m really surprised at the trust Koreans have for strangers. Take for instance how in Seoul, people don’t think twice about leaving their belongings unattended when taking photos. You DO NOT do that here in Malaysia, where leaving your handphone on the table in a restaurant is a no-no – even when you’re seated next to it!

In Malaysia, old and fragile-looking ajummas are actually capable of fleecing you. Heh, you’ve been warned ;-).

On that rather sour note, here’s wishing you a very happy holiday. Oh don’t worry, there’s still much good in the world…like that Malaysian girl who didn’t rip off an old lady at Yoido’s Lexington Hotel on Nov 9 when she had half a chance :-P.

Merry Christmas and Happy New Year all! Bring on 2009!

Tired of Chirstmas stories?:
Then check out the K-popped! Trio’s stories on their recent trip to Seoul!