Every restaurant has a their own unique Samgyetang recipe. Tosokchon is liked by so many because their Samgyetang broth is rich, flavourful and simmered to perfection.

While in Seoul, the K-popped! Trio met up with Seoul Sista twice. On our second meeting, Seoul Sista took Liz and I to Samcheong-dong for some comfort food. During the first meeting, the Trio were whisked to a Hanok style restaurant for some darn good Samgyetang.

We met Seoul Sista in Myeongdong one evening. Almost immediately she asked us what foods we’d like to try. Upon hearing “Samgyetang”, Seoul Sista clapped her hands and went, “AH! I know just the place!”

Tosokchon’s samgyetang is extremely popular among the locals and visitors alike. The restaurant is also a favourite of the previous South Korean president, President Roh Moo-hyun.

At night, the exterior of Tosokchon is non-descript. A neon sign brought our attention to the modest entrance of the restaurant. As we entered the establishment, Tosokchon was anything but modest. In fact, it looked like a small Hanok village to me.

Restaurant or village?: The interior of Tosokchon is huge.
Come to Tosokchon in the Summer and battle hordes of customers for
a bowl of their famous Samgyetang. 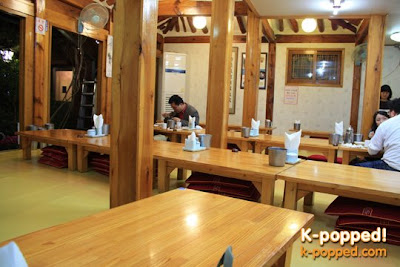 Traditional: One of Tosokchon’s many Hanok style dining rooms.
The ondol floors are pleasantly warm and comfortable during the colder months.

We sat down on the warm ondol floors and got comfortable. While we waited for our meal to arrive, we were served pots of very nicely made radish and cabbage kimchi. When we were served, the Trio were shocked to see that Seoul Sista had ordered FOUR cauldrons (well, they looked that big to me) of samgyetang.

Eating Samgyetang: You’re given ginseng wine with your bowl of Samgyetang. Either drink it, or add it to your soup. First, eat the chicken, dipping the stewed meat in a salt and pepper seasoning if you wish. Discard the bones in the steel pot provided, then stir the remaining glutinous rice in the broth and eat your Samgyetang like congee.

The samgyetang was very good and nothing was left to waste. I guess those bowls weren’t that big afterall. 🙂

In traditional Korean medicine, it is believed that the best way to fight off the summer heat is to eat foods that will heat you up. In other words, to fight fire with fire. Perhaps there is some truth in that, but I found samgyetang perfectly fitting for the cold as the next day (and the day after) I was walking around Seoul in November in just a shirt. Imagine what ginseng would do to me in summer! 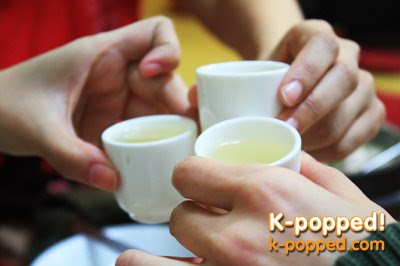 Trio moment: A toast to great food and great company!

The bill:
Samgyetang at Tosokchon: KRW15,000 per bowl

We ordered a bowl each, which seemed enormous but we were able to polish off our bowls. The restaurant also serves other items which, I’ve been told, are also very good.

Getting there:
Stop at Gyeongbokgung station on subway Line 3 and leave the station at Exit #2. Tosokchon is a 5 minute walk from here. The restaurant is well-known and locals should be able to assist you with directions. 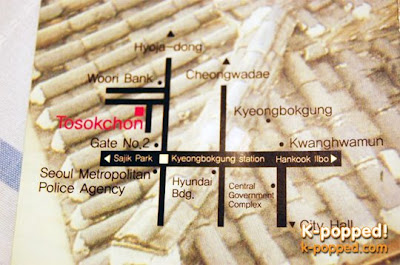