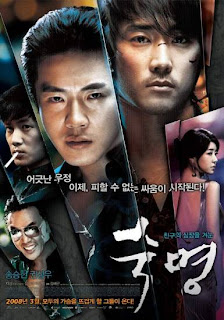 Thumbs up for the stunts and main stars. Song Seung-hun and Kwon Sang-woo are good in their roles.

The former plays Woo-min, the protagonist who is destined to a rocky path in life after taking the fall for a heist gone wrong. He has to make difficult choices especially when a friend turns out to be the enemy. Song plays the tortured hero role well.

Meanwhile, the latter plays a hot-tempered crime boss who doesn’t think twice in mowing down anyone in his path. The deceiving Chul-joong easily betrays friends as long as he gets what he wants. Kwon deftly portrays Chul-joong as a short-tempered thug who is surprisingly comical.

However, such impressive acting chops are wasted here. The film’s plot is convoluted to the point of being nonexistent. It unfolds with so much going on, but things don’t seem to head anywhere. The feel of a main plot or objective is seriously missing, so much so that mid-flick, one still wonders what the whole point of the film is.

For one, the relationship between the main and supporting characters is only established at the end of the flick. That’s just not right, especially when the relationship is the thrust of the movie. 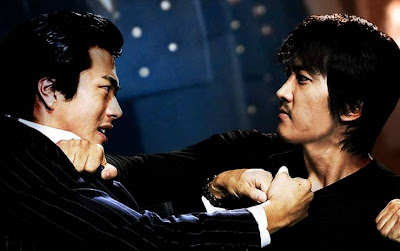 Take it back!: Song (right) teases Kwon about his puffy hairdo.

Since the foundation of the film is not laid out in the beginning, there is nothing to build the story upon. The significance of what goes on in the film doesn’t quite register with the clueless viewer. Heck, even the subplots are easier to follow than the main story.

Apart from that, important characters are underdeveloped. When it comes to the “big reveal”, the key person in the whole scheme of things isn’t someone you’d expect. Sure, the film tries for a surprise twist at the end, but it fails miserably because of the directionless storyline. 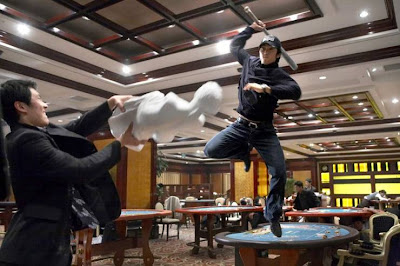 Perhaps the film’s only saving grace is the impressive stunt work in the fight scenes. One thing though, why is it that the gangsters here only fight with sticks and daggers instead of guns? Kwon Sang-woo’s character is seen wearing a holster…for his dagger.

All said, Destiny is a disappointment due to its lack of purpose. With such a bad screenplay, no amount of Oscar-worthy acting or skilful stunts can elevate this flick from the pits. Hey, what can I say? It’s Fate(d), no? 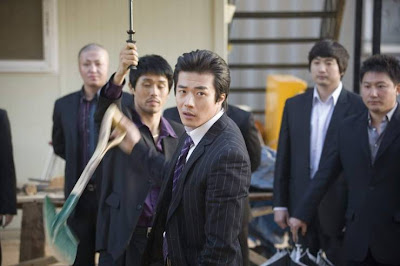 Four friends from the underworld decide to rob a casino for their last hurrah but the plan goes awry when one of them betrays the band of brothers. From that day onwards, their lives take on different paths but a day comes when their destinies intertwine once again.

Orchid bought the DVD from Speedy. It was on offer, RM19.90.