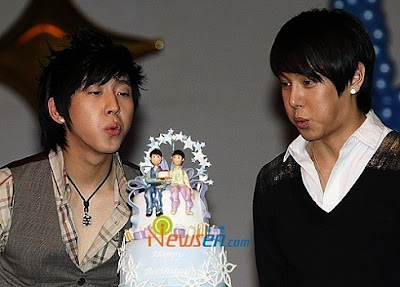 Birthday boys: Brian Joo (left) and Hwanhee blow out the candles
on their anniversary/ birthday cake

Whoa, they’ve been in the entertainment industry for 10 years already? They are early bloomers, I tell ya. On Jan 10, Fly to the Sky duo Brian Joo and Hwanhee celebrated their 10th anniversary. They debuted in 1999.

The pair held a party-cum-fan meeting at the Grand Hilton Seoul Hotel at 6.30pm. In addition to that, the pair also celebrated their birthdays with their fans! Brian turned 28 on Jan 10 while Hwanhee will turn 27 on Jan 17. 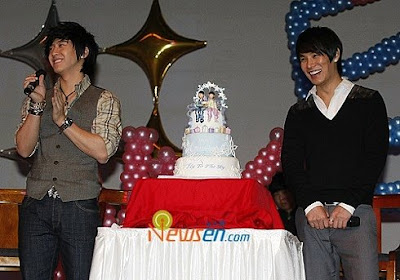 A decade together: ‘Yes, yes, we still love and respect each
other after all these years….’ 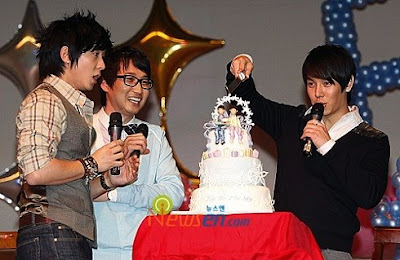 Cake cutting:‘…but that doesn’t mean I can’t sever the head on that
Mini-Me doll of yours, Brian! Bwah ha ha ha ha.’

During the party, the pair announced that they were in the midst of completing their 8th album. The long player is set to hit stores at the end of Jan.

You know, while in Seoul last November, we bought Fly to the Sky’s Recollection album…and I absolutely lurve it. The entire album is in both my MP3 players!

I’ve always enjoyed Hwanhee’s strong vocals and needless to say, my fav song off the Recollection album is his solo rendition of 소원 (what does that mean in English? Babelfish tells me it’s “Estranged”. Also, where can I find an English translation of the lyrics? It’s such a beautiful track.)

Fly to the Sky’s 8th album is definitely worth a listen when it is released. All the best guys! And oh, Happy Birthday! 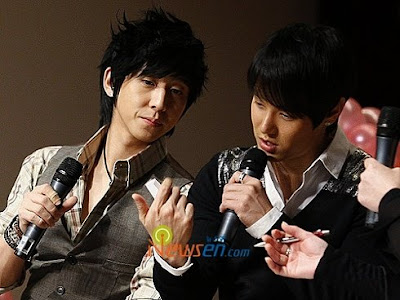 Q&A session: ‘And this is from Liz K-popped of Malaysia. She asks: Hwanhee,
can you please give me the name and number of your plastic surgeon?’ 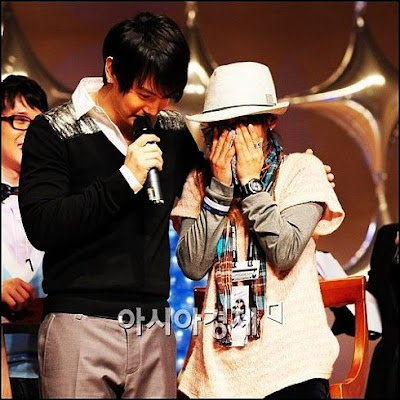 Touched: An overwhelmed fan gets a moment with Hwanhee 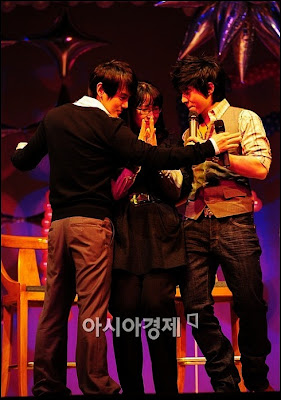 Fan service 1: The boys hold a (mild) naughty party…yeah,
like JYP or Seung-ri 😉 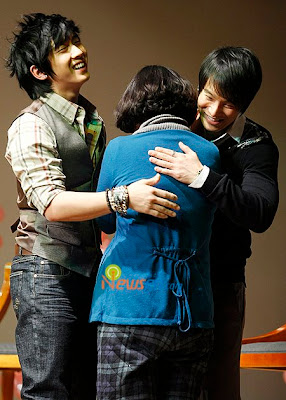 Fan service 2: Oh c’mon guys, this is still so G-rated