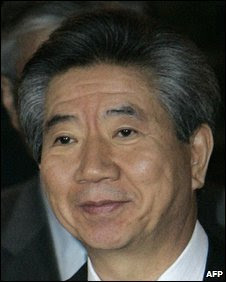 Former South Korean President, Roh Moo-hyun (pic left), died after falling off a ravine while hiking near his home this morning (May 23, 2009).

It is believed that 62-year-old Mr. Roh committed suicide. The final year of Roh’s administration was tainted with scandals of corruption, which are still under investigation today. Thus, it is suspected that that’s the reason for his untimely death.

You can read more about his work and life at the BBC news site.

This piece of news has found its way on to K-popped! because when the Trio were in Seoul last November, we were brought to President Roh’s favourite sam gye tang restaurant Tosokchon. I was surprised upon recognising his name in the headlines as I’m not at all a follower of global politics.

Rest in peace Mr. Roh Moo-hyun. Thank you for your good taste in sam gye tang.