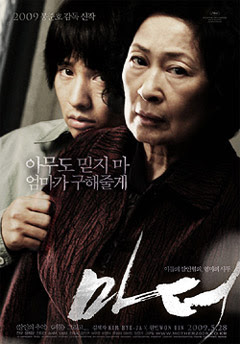 Bong Joon-ho’s film, Mother, starring hallyu heartthrob Won Bin has been selected for submission to the 82nd Academy Awards in 2010. Mother is a story about a mentally handicapped boy who is framed for murder, and his mother’s struggles to clear his name. The film has been set to compete in the Best Foreign Language Film category.

According to the Chosun Ilbo, Mother was among six films considered for submission. Bong’s film was finally selected for “artistry of the film, the influence of the distributor, the reputation of the director and the level of recognition of the film“.

Congratulations! We’ll hope for all the best!