They’ve shed their bubblegum image for a more mature, edgier look. SHINee, a quintet from South Korea, is back with their third mini album entitled 2009, Year of Us. 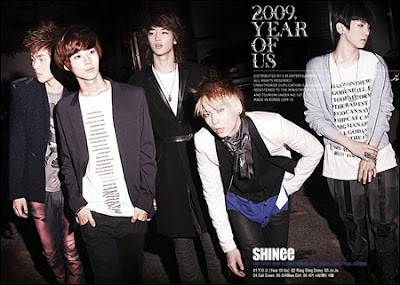 The album drops tomorrow (Oct 19) with a track that has a major hook. Ring Ding Dong will cause fan girls and boys to either spontaneously burst out into the ultracool dance moves or go: Ring ding dong/Ring ding dong/ Ring diggi dingdiggi/ Ding ding ding….

Oh yeah, SHINee is rockin’ the house with the groovy “Afro-electro” number that is driven by a snazzy drum rhythm and electro beat.

The latest album also reportedly focuses on each individual’s distinctive style. Onew duets with veteran ballad singer Kim Youn-woo in The Name I Loved while Minho and Key are set to mesmerise fans with their rap battle track Get Down.