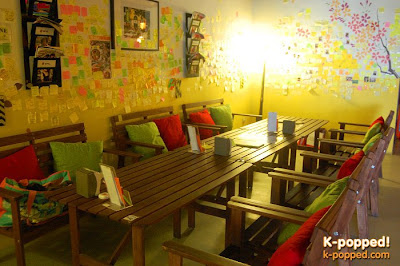 Ambience: A cozy atmosphere for our very first Sogaeting event

OK, let’s start with the not-so good news. Only 2 Korean boys (out of 5) made it for the event. The rest were…erm, unavailable at the last minute. Also, one of the girls pulled out because of a personal problem.

Nonetheless, the “show” must go on…and it did, albeit a little delayed. K-boys Jun and Min arrived an hour late for the event and to make up for the male-female ratio imbalance, two guys from The Street Café sportingly jumped in to balance things out. Thanks Eddie and Joon! 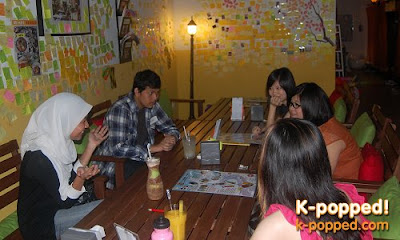 Early birds: Participants chatting while waiting for the rest to arrive

And the girls – my, oh my – they were the loveliest, friendliest and most positive bunch any host could hope for. There was so much to talk about between the new friends that they continued to hang out at Starbucks right after the event!

Here are some of the participants’ thoughts on the event:

Samantha Tew: Awesome =). But it will be even better if more people attended. (I’ve made) new Kpop friends…me, Syd and Nina became really close after the event.

Kim Irsyad: I love it! It has a different kind of friendly vibe in the meeting…which is cool.

Cindy Xin: It’s a whole new chapter for me…meeting new friends and having so much fun! It was a great experience! Never thought that we Malaysians would blend with the Sogaeting culture so well.

Syd Mokhtar: We really had a good time and we are now friends and plan to meet up again…for the next sogaeting! I’m gonna come as the sunbae and give a speech or two (laughs).

The first Sogaeting @ The Street Café unofficially carried the “Korean Boys” theme and the anticipation of meeting new Korean friends.

However, according to Orchid, there will be a different theme for the following Sogaeting gatherings, so you’ll have to stay tuned for what she has up her sleeve. For this event, when the guys arrived, they were asked to place a personal item of theirs in a special container. After the participants have settled down, an ice breaking game was played to get everyone to mingle.

We saw the participants running around to get information from each other and the first person to complete the form correctly won a prize. Congrats, Samantha! 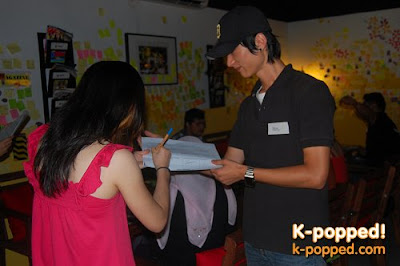 After that, the participants’ seating was rearranged. The ladies were asked to pick an item from the container that contained the guys’ personal items. The guy is then required to sit opposite the lady who has his item and have lunch together :-).

It warmed the cockles of our hearts to hear the chatter and laughter from the group, which indicated that everyone was having a great time! 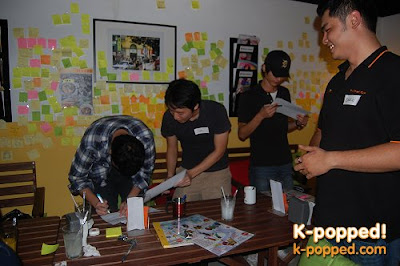 Friends: ‘Dude, write down your details for me, will ya?’

After a delicious meal and a good time exchanging stories and contacts ;-), it was time to say goodbye. But before everyone left, each person received a’lil goodie bag courtesy of Korea Tourism Organization and a Galaxie magazine.

A big thank you to everyone who made K-popped‘s 1st Sogaeting @ The Street Café a success.

The event was jointly organized by K-popped! and The Street Café, which by the way, makes a mean Vanilla Milk Bubble Tea. The drink was so good that it got our Hallyu Surf Instructor craving for it these days.

Friend Orchid on FB & write her your details:
http://www.facebook.com/orchid.kpopped