World Cup fever has gotten to Syd, who dutifully dons her red shirt and heads out to Little Korea, Ampang to cheer on the South Korean team. She shares with us her experience cheering on the streets with the Korean community in Malaysia.

One of the most anticipated sports event is here – the 2010 FIFA WORLD CUP! Even if you’re not a football fan, you can’t escape the excitement and passion for the Beautiful Game. 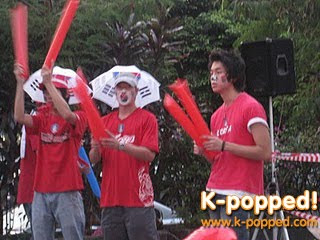 Victory Korea!: The Koreans in Malaysia show support for
their football team

This year, the newly-launched Saranghaeyo Korea Club (SKC) organized a Street Cheering event in a show of support for the South Korean team. SKC was initiated by Korea Tourism Organization. 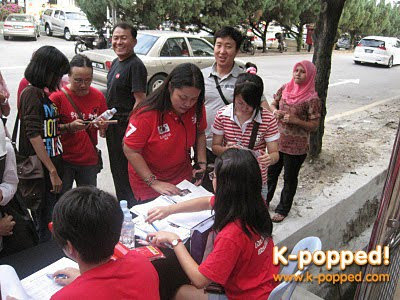 I arrived at the venue around 6pm. As a member of the SKC, one had to register first. We were given goodies such as the red T-shirt (directly imported from South Korea!), the devil’s horns’ headband and some Korean snacks.

My friends and I then helped out with face painting. Whether you’re a kid, teenager or adult, everyone got into the spirit of things and painted their faces to show support for the team. 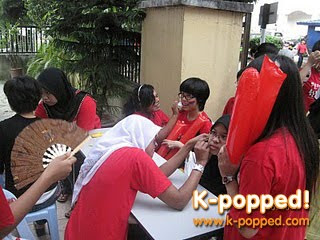 Work of art: Everyone gets their face painted 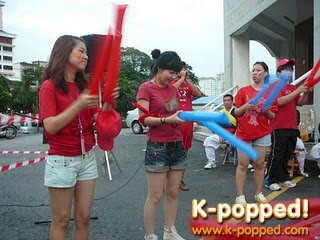 Kick off was at 7.30 sharp. After the South Korean national anthem was played, the crowd at Little Korea cheered non-stop for the team. Our spirits we kept high throughout the game, thanks to the group of Korean teenagers that led us in rousing cheers and chants.

When Argentina scored against South Korea, our spirits didn’t waver and we kept on cheering and chanting, “Gwaenchana” (It’s OK). Before half time, South Korea was down by 2 – 0. However, Lee Jungsoo scored just before the half time whistle went off and the crowd roared. Everyone was hugging and high five-ing each other. 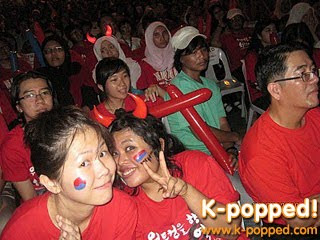 On the edge: The nervous and excited supporters 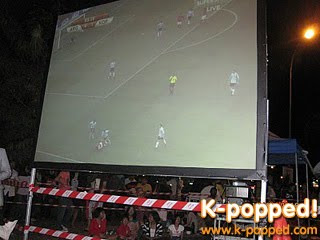 The Beautiful Game: On the big screen

During the break, songs by korean pop groups such as T-ara, and 2AM were played and everyone sang along to them. When the second half started, our spirits were still high.

Eventhough South Korea lost the game (4-1) to Argentina, everyone at the Street Cheering event still went home with a smile on their face. 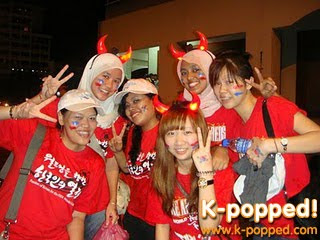 Girrrl power: Syd (2nd from left) and her gang 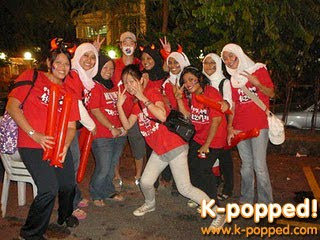 Make some noise: The girls with the Korean cheering
team leader (center, with beige cap)

Showing support for the South Korean football team with the Koreans in Malaysia was a truly fantastic experience. It’s definitely more fun and exciting to watch a game with like-minded people and friends.

Congratulations South Korea for advancing to Round 16! Chukahae!

The next Street Cheering event will be on June 26 at 10pm. South Korea plays against Uruguay.

K-popped! Trio gets ready for Deepavali