Kpop fans were given a fantastic treat on 26 June when Beast rolled into town for an exclusive showcase. The six-member pop group was in Kuala Lumpur to promote the new Asian edition of their Shock of the New Era album.

Beast — stylized as BEAST and B2ST — put on a spectacular one-hour show at KL Live. However, while the group’s performance proved to be awesome, there were many disgruntled fans due to the showcase’s messy organisation. For one, due to a series of miscommunications, quite a few fans — some who were present at the venue as early as 6am — had to be turned away. 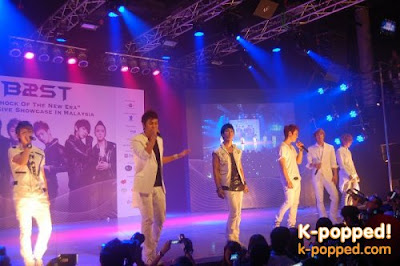 On top of that, the crowd at KL Live were constantly reminded not to push during the showcase. Before the show kicked off, a special announcement was made on the matter as 35 fans had already fainted. Even BEAST themselves cautioned their excited fans of the situation during the show.

Those problems aside, Beast’s showcase in Malaysia was superb! Prior to showtime, Beast music videos were shown on the big screens to warm the crowd up. Who needs an opening act when you have fans who can heartily sing along to your Korean tracks, right? Even music videos by 4Minute, a girl group under the same talent agency, Cube Entertainment, were enthusiastically received.

Then at 10 minutes to 9pm, Beast appeared onstage in smart, white suits. The boys kicked off the party with their debut hit, Bad Girl, before a quick interview session where they were asked what they thought of Malaysian fans. Needless to say, their response — “So beautiful” — caused the fans to roar in delight.

Beast then launched into Mystery. The maknae (youngest member) of the group Dong Woon, then introduced – in English – the group’s next song: the easy-listening ballad Easy. Then as the boys took a quick break to change costumes, three lucky fans were invited onstage to dance and sing to Beast’s smash hit, Shock. The audience was then asked to select the best impromptu performer. The lucky fan got to remain onstage for a photo session with the boys.

The boys soon returned to the stage clad in red suits and happily took pictures with the euphoric fan girl. 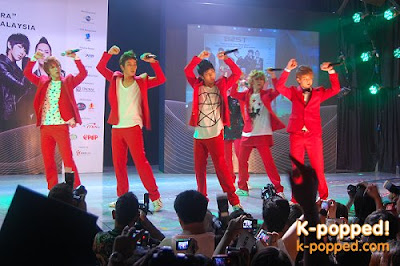 After performing Special, a lucky draw followed. The lucky audience member, Siti, was then invited onstage and serenaded by the boys with their ballad Oasis. Siti was sure the envy of many that night as the boys focused their attention on her throughout the song.

Dong Woon then asked the crowd, “Do you wanna take pictures with Beast?” The fans, of course, screamed that they did and the boys turned their backs to the audience and posed with the crowd in the background. Cameramen were seen scrambling onstage for the Kodak moment.

In the final mini interview with the boys, the members of Beast were asked what their plans were after Malaysia. Doo Joon, the leader, said: “We’ll return to Korea for a day, then fly off to Japan for promotions. After that, we will be preparing for our third album.”

The spectacular Beast showcase then came to a close with the boys performing a medley of Shock, Bad Girl and Mystery. Before departing the stage, Dong Woon shouted, “I love Malaysia!” The crowd screamed their gratitude only for Doo Joon to run back out and add: “Me too!”

It’s fair to say that Beast definitely made a mark with their showcase. With such addictive tracks and great showmanship, their performance has definitely whetted the local K-pop appetite for more Beast-ly things. Let’s hope the boys return with a full blown concert in the future.