Friends, because you made it hip to be K-popped!, 8TV is bringing you the latest news from Hallyuwood.

8TV Nite Live, which has been on air for a year and a half, is an interactive talk show that focuses on the hottest things/events under the Malaysian sun.

The Kpop phenomenon has been detected by 8TV Nite Live’s radar so the program currently offers up-to-date Kpop entertainment news and music videos! 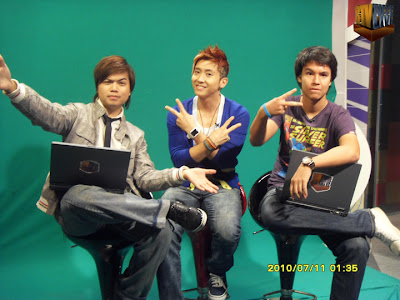 Moe Nasrul, one of the hosts of 8TV Nite Live said: “Fans get to vote for which K-pop music video they would like to watch on the program during our K-pop live music polls every Saturday.

“It can get competitive and it is really fun to watch the numbers rise and fall as the show progresses. On top of that, fans get to chat with the hosts and other K-pop fans live as well.”

Moe, who is a fan Wonder Girls, SNSD, Rain and Brian Joo (just to name a few), said that his most memorable stint for the program so far was his interview with Korean-American singer Brian Joo on July 11.

“We connected with him before the show, and were just hanging out in the studio,” Moe told K-popped! in an exclusive interview.

“We laughed and joked like we weren’t TV hosts and celebrity, but a few high school friends who met up for a reunion.”

Apparently, Moe had a lot in common with Brian. Off-screen, the pair traded stories about being the only Asian kid in class while growing up in the States.

Their on-screen chemistry was also potent; so much so that the usual format and stories for 8TV Nite Live were scrapped to make way for more “Brian & Moe” witty banter. (Watch a clip of the show below!)

Kpop would not be given so much prominence in Malaysia without its fans. So we asked Moe what he thought about them.

“They are some the most dedicated, wonderful, and fun loving people I have ever encountered,” Moe replied.

“The fans are not afraid to show love for their favorite group or singer and that says a lot…considering that the general perception is that Malaysians are shy. We’re not shy when we’re passionate about something!”

Catch Moe and his co-host Mike Campton on 8TV Nite Live every Sunday, Monday and Tuesday at 12:45am to 1:45am.

Do you watch 8TV Nite Live? Tell us what you like and don’t like about the program!