“It was pretty much my decision to come here,” said Korean-American singer Brian Joo, who was in Malaysia for the first time for a showcase / meet the fans session on 10 July.

“Malaysia’s the first country I’ve come to for a fan meeting. I got a personal invite, and then I called my company and said, ‘This is a good opportunity, let’s go to Malaysia and show them that I’m doing things on my own now,’” he continued.

The 29-year-old has been on hiatus from South Korean duo Fly To The Sky since 2009. Now, Brian and his partner of 10 years, Hwanhee, are busy pursuing separate careers. And things are looking bright for Brian as he is all set to spread his solo wings. He already has two albums under his belt and is working on a third, which is scheduled for an August 2010 release. 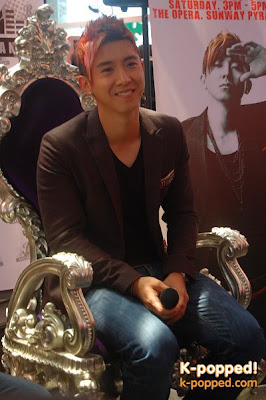 At his showcase at The Opera, Sunway Pyramid, Brian wowed his devoted fans, some of whom had come all the way from China, Japan and Korea to see him. The singer belted out seven tracks, including My Girl, his personal fave, Tears Run Dry, and both the Korean cover and original version of Jason Derülo’s In My Head.

According to Brian, he was delighted when Warner Music asked him to cover Jason’s hit. “I was a big fan of Jason Derülo since he came out with Whatcha Say. I’ve always wanted to do a pop song cover in Korean and being able to release In My Head was an honour.”

Brian also shared a stage with Jason when the latter visited Korea in March. So did the pair have chemistry? “We hit it off, like, point blank when we first met each other. We just went on stage and killed it and we still keep in touch until now.”

The crowd was very responsive all through the hour-long showcase and really got into the music. So does this mean Brian is keen on returning to Malaysia for a full-blown concert?

“That, I would love to do,” he said. “It’s not really a decision (I can make) on my own. Hopefully, if someone offers me a concert whether in Malaysia, Singapore or any country…yeah, as long as you guys contact my record label and work things out, I’d love to do it.”