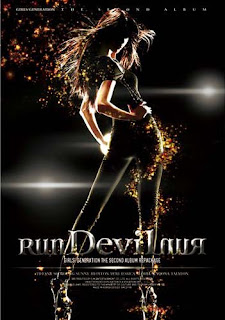 Girls’ Generation or Sonyeoshidae (SNSD) are the reigning pop princesses of the Korean music scene. And thanks to their smash hits Oh! and Gee, the nine members of SNSD have been successfully marketed as a syrupy sweet, yet sexy, girl-next-door types. Thus it comes as a pleasant surprise when one discovers that the girls are also capable of more mature sounds.

Their re-released second album, repackaged now as Run Devil Run, contains tracks from the original album, however, it’s the added bonus songs that showcase SNSD’s wider range. Wade through the many crunchy, but still catchy, Kpop tracks and you’ll find lovely ballads such as Star Star Star and Forever.

In addition to that, there is the album’s title track, which has a mean beat that is at once sexy and addictive. But even though the songs on this album are all iPod-friendly and could be listened to endlessly, I’d advise moderation so as to avoid an overdose of sweetness.