BEAST performed for the 4th time in Malaysia at the MTV World Stage 2011 on July 24. Yes, hands down, Beauties are by far the luckiest Kpop fans in our country. Who else has the privilege to see their idols in the flesh four times in a little over a year?

Held at i-City, Shah Alam the annual MTV event saw four acts performing on one stage. Malaysia is represented by Pop Shuvit, with a special guest appearance by Manbai. International acts include our beloved B2ST, Neon Trees and 30 Seconds to Mars.

PASSES: Our VIP tickets to the MTV World Stage Live in Malaysia 2011

Last year, the event was held at the Sunway Lagoon Surf Beach and it was a blast! This year’s venue…sucked because one could not get a good view of the stage at the VIP section.

To i-City we go

Orchid and I received our passes a day before the event (kamsahamnida, Dawn!) and decided to make the long drive to Shah Alam because of B2ST. i-City is rather inaccessible by public transportation and the parking fee will set you back RM10.

Security was selectively tight. You see, we were barred from bringing in our compact camera, hence the lack of B2ST photos.

Orchid was stopped at the checkpoint and we had to walk all the way back to our car (about 10 minutes) to put it away. However, we later discovered that many managed to bring their cameras in. Oh, it could be our fault — we were not camera-smuggling savvy enough. Sigh.

The concert started on the dot (6:30pm) and we reached the VIP area when Pop Shuvit was performing to an appreciative crowd. We could see very little of the stage from where we were, but there was the huge screen…when it wasn’t partially blocked.

Basically, we watched the concert from the screen — something which could be done at home :P.

OUR VIEW: This is what we saw from where we were. Tee hee hee.

B2ST to the fore

BEAST kicked off their set with Shock at 7:56pm to the delight of the fans. After the “electrifying” performance, the sextet performed one of their latest numbers Fiction before saying hello to the crowd. The boys then serenaded the crowd with On Rainy Days.

A short video break later, B2ST appeared on stage again for Special before launching into the dance number Soom.

B2ST TAKES A BREAK: You’ll just have to take my word for it because this is the only pic I have to show you 😛

Dong-woon, the designated English communicator :P, addressed the crowd saying, “Did you enjoy our performance? You guys are the best. This is our last song.”

And it really was. B2ST ended their set with the cheery and playful Beautiful.

While it was nice to see the boys representing Kpop on a world stage, B2ST didn’t  look like they gave their best for the performance. I saw the group rock their very first showcase in Malaysia with so much energy and passion, and that was lacking at their MTV World Stage performance. Perhaps the boys were tired.

Watching the boys at their own concert would be better than their brief appearance at the MTV World Stage.

You did not miss much Kpop action if you weren’t at this year’s MTV World Stage. Just tune in to the MTV SEA channel (Astro 713) on 8/8/11 to watch the boys perform. Trust me, you’ll get a much better view of them than I.

Once B2ST cleared the stage, Orchid and I left the VIP section too. By that time, it was dark and I was being eaten alive by mosquitos. We did not stay for Neon Trees nor 30 Seconds to Mars as alternative rock / rock just ain’t our thang.

We took the 5-minute walk to the VIP dining area for dinner and spotted fashion designer Datuk Jimmy Choo having dinner too. After that, we skedaddled out of i-City. 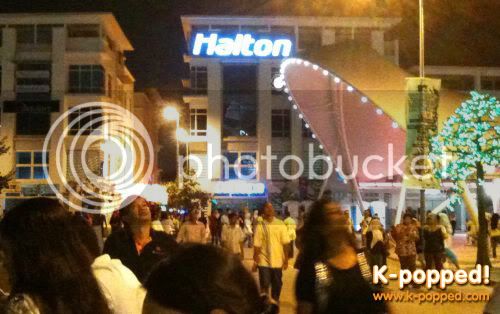