Kpop fans in Malaysia got hit real hard by the Hallyu. Thanks to Tune Talk, we were up front and center when it happened.

Six Kpop acts converged on a Malaysian platform for a one-night only concert in Stadium Merdeka on Sept 24.

The Korean Music Wave 2011 (KMW) was a treat for fans of FT Island and Big Bang, two popular Kpop acts that have not performed live in Malaysia.

It was a momentous day to finally see FT Island perform in Malaysia. That’s because back in 2008, the band was in Malaysia for a concert, but it was called off at the very last minute. (Read about the fiasco here).

Big Bang was hands down the biggest star in the KMW line up. However, only three of its members made it to our shores. Seungri performed as a soloist while GD&TOP brought the house down as a duo.

The group’s other two members Taeyang and Daesung were MIA. The former was in Japan as a special guest at 2NE1’s concert while the latter has refrained from public appearances after getting involved in a car accident that caused a fatality.

The other talents in the KMW line-up were Teen Top, 4Minute, U-KISS and Park Jung Min.

FT Island made a splash into the scene when they kicked off the show. The love and support from the crowd was – understandably – tremendous.

As the charismatic frontman, Hongki effortlessly teased the crowd while serenading them with the band’s popular hits such as Hello Hello and Bad Girl. Hongki, who is known for his singing chops, sounded excellent live.

During the brief interview session, the 21 year old said: “It has been 4 years since we came to Malaysia. We miss you. We want to hold our own concert here in the future.”

Next up, is the fairly new group Teen Top. The sextet that debuted in 2010 hitchhiked on the wave of excitement left in the wake of FT Island. They burst onto the stage in white suits and sang tracks such as Angel and Clap.

The teens performed standard Kpop fare, with the expected bubble gum twist to it. Nonetheless, the appreciative crowd lapped up everything the boys dished out.

What stood out the most was main vocalist Niel’s high-pitched voice, which reminded one of Mickey Mouse. We can’t fault the young man, really, as puberty has yet to hit.

I wonder if the group will change its name to “Men Top” once the members are out of their teens.

Ah well, whether boys or men, Teen Top gave their all right up to the last track Supa Luv and I believe they even made some new fans along the way.

With so much testosterone on stage, it was time to inject some femininity into the scene. 4minute launched their set with Mirror Mirror and heated up the stage with their sexy dance moves.

The ladies announced that it was their second time performing in Malaysia before they sang the very catchy Heart to Heart. 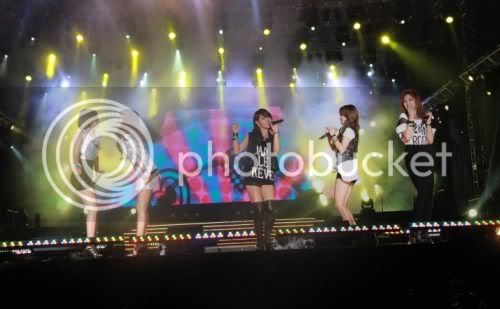 SHIMMY & SHAKE: ‘We like acting all cute and sexy.’

The girls’ performance then veered into familiar territory. If you saw the quintet perform at the DiGi Live K-pop Party in January 2011, you’d have seen it all. In fact, the enthusiasm from the crowd noticeably fizzled out a little during their set. Apart from the familiar repertoire, another reason could be because the crowd was mostly made up of fangirls instead of fanboys.

4minute faced a technical glitch during their set. The minus one track for I My Me Mine started playing again when the girls were about to perform Muzik. And so when the first few (wrong) beats came on, the girls went “No, no…Muzik! Sorry.”

U-KISS came on next. The septet was in Malaysia for a showcase in June 2011 and if you saw them at the showcase, you would be familiar with their repertoire.

Apart from the same old track list, the boys also performed their latest song Neverland, which IMHO is not as catchy or sticky as their hits Bingeul Bingeul or Man Man Ha Ni. 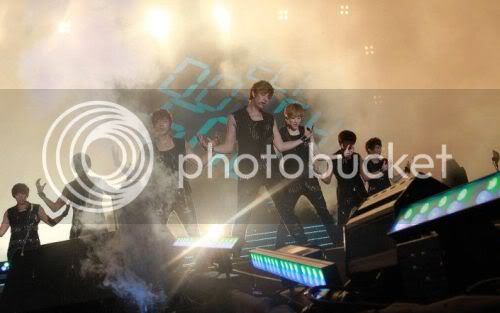 THE ONE THAT GOT AWAY: The U-KISS boys go, “Yeah, and it was THIS big”

During the interview session, the boys said that it was their third time in Malaysia, and that they have been busy with activities in Japan. They also plan to hold their own concert in our country. Hmmm, I’d advise them to only do that when they have more hits under their belt.

By now, the crowd’s energy level at the KMW was at its all-time low. Park Jung Min of SS501 appeared on stage belting out his mid-tempo tracks and ballads, and honestly, the show was very much on the ho-hum side.

Jung Min may have some sweet gestures – he spoke Mandarin and even prepared a note in Bahasa Malaysia for his fans – but the talent lacked a commanding stage presence. Unless you are already a fan, the talent was just another pretty face that dances and sings.

I guess the 24-year-old, who has been busy filming the Chinese drama Fondant Garden in Taiwan, will be remembered for shaking his booty at the excited fangirls.

High decibel screams pierced the night sky as soon as Seungri appeared on stage. Uh huh, “Victory” was the shot in the arm the crowd needed.

The dapper 20-year-old owned the stage as he entertained the crowd with three tracks: VVIP, Strong Baby and What Should I Do.

SAY WHAT?: ‘You need to scream louder girls, I’m deaf in one ear.’

VIPs (fans) started popping out of their seats to get closer to the Big Bang member, and Seungri expertly commanded the attention of everyone in the stadium. He danced, he teased, he whipped the crowd into a frenzy!

During the interview, Seungri cleverly avoided delivering the standard “I-want-to-have-a-concert-in-Malaysia” line and instead said: “I don’t want a concert here (in Malaysia), I wanna LIVE here!”

The stadium erupted in deafening screams again when GD&TOP hit the stage. The duo appeared on stage wearing technicolor jackets and the crowd was now standing on the chairs. The smooth pair showed off much charisma and attitude.

During the performance, VIPs sang along to the pair’s tracks and desperately lapped up everything the duo did. GD spoke to the crowd in English, and said that he was surprised at the fantastic response in Malaysia.

PARTAY!!: ‘Putcho hands in the air because we are gonna so disappear before you can say ‘GD & TOP’!’

Everyone was partying hard, riding high on the crest of the Hallyu when suddenly, the wave disappeared.

Right after their third track High High, GD&TOP left. The crowd chanted for an encore. It fell on deaf ears.

The energy in the stadium took a nose dive when it dawned upon everyone that the show was over. An intense sense of disbelief and disappointment permeated the air as reality set in.

Sure, the KMW ended on a high note, but the extremely abrupt end to the show left many high and dry.