Model turned actress Yoon In Young has always been known for her realistic villain roles in many Korean dramas. She debuted in 2005 and has starred in many hit dramas such as Empress Ki, My Love From The Star and Oh My Venus.

After a 2 year hiatus, Yoo In Young has returned to the small screen to star as Im Ye Eun in the latest drama, Good Casting.

Good Casting is an action comedy drama about a trio of eccentric women assigned as undercover agents to solve a corruption case involving a large corporation in Seoul.

Yoo In Young plays the role of one of the undercover agents who has zero field work experience. Intelligent in the IT world, this beauty with brains completes the work chemistry of the team.

Although her character portrays a clumsy person who often encounters hilarious mishaps which will tickle your funny bone, there is a heartbreaking side to her personal life as a single mother.

K-popped! had an opportunity to have a chat with this notable actress, thanks to our friends at One HD. Check out our exclusive interview below.

Q : What attracted you to take up the role as Im Ye Eun this drama?

Yoo In Young : I thought that this might be the chance to show some new aspects of myself, apart from an ‘urban image’ that I used to have. Plus, I wanted to be in an action comedy genre that contained some lighthearted fun. In that sense, Good Casting was a drama that I would never pass on.

Q : How would you describe your character Im Ye Eun and what are her charms?

Yoo In Young : Ye Eun has an endearing personality that the team is lacking, but she is also a character who is sloppy and clumsy. She is a lovely NIS agent who does her best when working. Even though she has a secret heartbreaking story that is hard for her to share with colleagues, she tries not to lose her bright character, which makes me fond of her. Q : You often play serious roles, so how do you feel about doing an action comedy?

Yoo In Young : Though it might be the same in every genre of series, I think an action comedy requires great compatibility with other actors. I found a huge synergy created by our collaboration in Good Casting. The atmosphere of the shooting site was awesome and some funny reactions came out naturally while we were acting. More importantly, it was lucky that no one got hurt throughout filming.

Yoo In Young : Before we started shooting, I went to an action school to strengthen my body, learnt how to shoot, judo and some other martial arts. As Ye Eun is a person who is not good at physical activities, compared to the other actors, I did not have that many action scenes. However, I did practice with them because the chemistry/coordination between actors is the most important thing when it comes to shooting action scenes. I tried my best to show how Ye-eun becomes better as the story goes on. 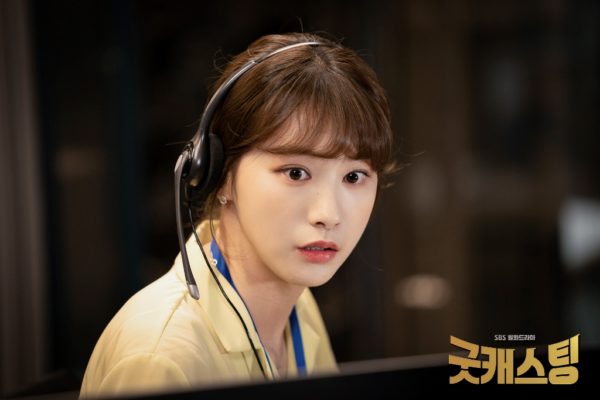 Q : What has been the most challenging and enjoyable part so far while filming this drama?

Yoo In Young : Since many scenes required physical action, I paid careful attention not to get injured. If that happens, there would be a risk for the whole drama, so I was very careful. Ye Eun is a character that has bitter memories unlike her bright personality. Throughout the shoot, there are a lot of important scenes which were full of emotions. I focused on conveying funny moments and sad moments. It was physically tough for the filming, but except for that everything was so good and fun that I could not wait to shoot for every single scene.

Yoo In Young : That would be a great compliment for us. But now it would be better to say that we are still on our way to become Korea’s Charlie’s Angels. We might be a little sloppy, but did our best thinking that we are like them. I hope you enjoy our drama. Q : You have played many different kinds of roles. Do you have a favourite? Or is there any role you would like to challenge?
Yoo In Young : All my characters were my favorites. But after Good Casting, I can say that Ye Eun will remembered as a character that was special. I was so happy and delighted during the time I was Ye Eun.

Q : What are the similarities or differences you share with your character?

Yoo In Young : Ye Eun is clumsy and cowardly, but when doing a mission she does her best to accomplish her goal. In that sense, we have something in common. The difference is that… her gifted skill is almost as good as a professional hacker? (laughs) I am not so good with computers. Sometimes it was surprising to see how good she was at manipulating computers.

Q : Please name three words that you would use to describe this drama.

Q : If given the opportunity, would you like to be part of a variety show? What type of shows do you like?

Yoo In Young : For me, variety shows are still a difficult genre. But if the program has a format that I can show my personality and nature/real life, I want to give it a try. Q : Have you been to Malaysia or Singapore? Please tell us what you remember or know about the country and please give the fans here a shoutout.

Yoo In Young : I went to Malaysia for a shoot a long time ago. I still have vivid images of that visit, so I want to travel to Malaysia someday for sure.

I’ve been to Singapore too with my family. It’s a beautiful, clean city with delicious food and kind people which gave me a nice memory. I felt that Singapore has lots of various charms.

Lastly I will greet my fans. Hi, I am actress Yoo In Young. With Good Casting, it is a pleasure that I can say hello to the fans in Malaysia and Singapore. Please look forward to my new role and continue to show me interest and love as an actress. I hope you always take care of your health and if you have a chance, I’d like to meet you. Thank you!

That’s all for our interview with Yoo In Young. Don’t forget to tune in to Good Casting which airs every Tue & Wed, 8.10PM, within 24 hours of Korea on Astro Channel 393!