Incheon is a city that most people simply think of the largest international airport in South Korea, however, Incheon has more things to see and experience than you imagine! It is the third-largest city in Korea that used to be a gateway where the modern, foreign civilizations were brought into Korea. Therefore, it is a city where you can feel the modern and traditional atmosphere at the same time.

Let’s now dive into Incheon and find out the best ways to enjoy the city to the fullest in a day!

Incheon is a popular shooting spot for many Korean dramas, movies, music videos, and TV shows. If you are interested in visiting these filming locations, book Incheon K-drama/movie Shooting Spots 1 Day Tour departing from Seoul. Here is the list of famous K-dramas that were filmed in Incheon!

Songdo is a modern ‘Smart City’ in Incheon that has Songdo International Business District, so-called Songdo IBD. In front of Songdo IBD, there is Songdo Central Park, inspired by New York City’s Central Park. Since there is a lake inside the park, you can enjoy water activities, such as canoes and water taxi service. Due to the futuristic attractiveness of the city, many K-dramas were filmed here.

One of the renowned K-drama that was filmed in Songdo is “Itaewon Class”, starring Park Seo Joon, Kim Da Mi, and Kwon Na Ra. It was filmed at Songdo Triple Street, a shopping district that has numerous restaurants, cafes, and attractions to enjoy. Many festivals are also held at the walkway of Triple Street, decorated with artificial cherry blossom trees. Hyundai Premium Outlet is also located at Triple Street so it is the perfect place to spend a leisurely day with family, loved ones, and friends.

One of the popular filming spots in Songdo is Gyeongwonjae Ambassador, which is a 5-star hotel with traditional Korean architecture. Since the hotel is next to Central Park, you can see the amazing view of traditional houses in harmony with the contemporary buildings of Songdo IBD. Because of this unique cityscape, it became the filming set of North Korea in the K-drama, “Crash Landing on You”.

“Goblin (Guardian: The Lonely and Great God)” was also filmed at The Royal Suite Room of Gyeongwonjae Ambassador. The scene of Kim Shin (Gong Yoo) and Ji Eun Tak (Kim Go Eun) going on a good-bye trip was filmed here. Like this, Gyeongwonjae Ambassador has been a filming location for many Korean series, such as “My ID is Gangnam Beauty”, “Secret Boutique”, and many more.

Unlike Songdo, Open Port Area (Gaehangjang) is the Incheon Harbor Area where you can travel back in time. It includes China Town and Jayu Park, which are also often the filming spots of K-dramas. Because it used to be a gateway to Seoul during the Joseon Dynasty (1392-1910), a variety of cultures overlap and you can see both Japanese-style and Chinese-style architecture. Jayu Park, which means Park of Freedom, is the first Western-style public park in Korea and it is the best place to see the amazing view of East Incheon and the ocean view of Yeongjongdo Island. One of the scenes of “Goblin” was filmed in front of the former Jemulpo Club, which used to be a social community established in 1891 by foreigners living in Incheon.

Hanmi Bookstore is located in Baedari Secondhand Bookstore Alley, where you can find the countless secondhand books. While walking along the street, you can imagine how old residents used to live in the area and recollect the scenes of “Goblin” that was taken in front of the Hanmi Bookstore. If you are lucky enough, you can easily see Korean celebrities shooting in this area. 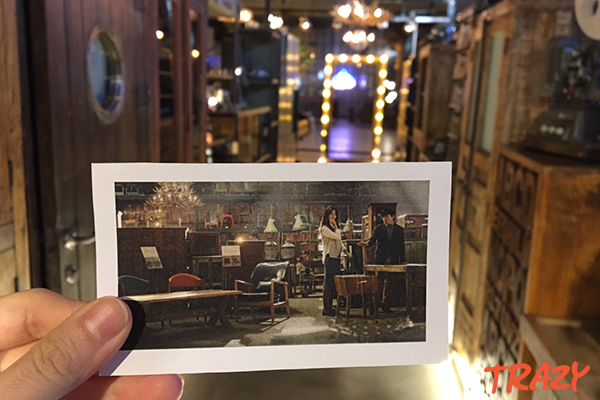 Incheon is not only a shooting location for K-dramas but also for K-movies. For example, the movie “Beauty Inside”, starring Han Hyo Joo and many famous actors and actresses, such as Park Seo Joon and Park Shin Hye, was taken at Cafe Valor, in Bupyeong. Valor is originally a brand that sells vintage furniture, but it is now frequently used as a filming site. If you order a drink at the cafe, which is worth ordering, your receipt becomes an admission ticket to the Valor Studio, where the movie was filmed. It is also an awesome place to take Instagrammable pictures so you shouldn’t miss it out!

Cafe Valor is the dreamiest place for K-pop fans as well as K-drama/movie fans. Many K-pop idols took music videos at Cafe Valor so you can find the autograph and pictures of famous idols, including WANNA ONE, EXO, ZICO, and many more. You can find many photo spots of WANNA ONE in particular, because they had an ad shooting at Cafe Valor.

If you love to leave instagrammable pictures of your travel memories, Incheon has plenty of good photo spots ready for you! Since there are many colorful attractions in Incheon with a diversity of cultures, you will easily find good places to do the trendiest SNS, such as Instagram, TikTok, and YouTube. Book Incheon Instagram Photo Tour and find the best instagrammable places! You can either depart from Seoul or meet tour staff in Incheon.

Wolmi Island is one of the must-see attractions in Incheon and it is a place for a perfect getaway from busy city life. Wolmi Island is a small islet with a spectacular view of the sea and the lighthouse. Wolmido Light House Road is one of the best photo zones in Wolmi Island. There is also an iconic ‘Incheon’ sign just like ‘Iamsterdam’ in Amsterdam, which is a popular selfie spot. Wolmi Theme Park & My Land are the iconic theme parks in Wolmi Island that reminds of Coney Island in Brooklyn, New York. Like Coney Island, it is next to the sea and the attractions are very colorful and vintage. Biking and Disco Pang Pang are the most popular rides that you must try out!

Sinpo International Market is a local market where you can try delicious local foods, such as chicken, dumplings, Konggalbbang (a Korean snack originally introduced by the local Korean Chinese people), and many more. The most popular food is Sinpo Dakgangjeong, which is a crunchy Korean fried chicken, and you will see the long queue in front of the shop even on weekdays.

Just next to the Sinpo International Market, there’s a cute photo zone, which is called Snow Village. It is a mini winter themed area where you can take photos with Olaf! If you are a fan of the movie, “Frozen”, this place is where you must stop by.

Although the Open Port Area is mentioned as a popular K-drama filming location, it is also a great place to take pictures. Since there are the old remains of the first foreign settlers of Korea, you can take photos as if you have traveled back in time. You can also dress up as a character from Korean history, by renting Korean traditional hanbok or 19th-century costume! Visiting the Life Museum is highly recommend as well since you can see how the lifestyle of Koreans has evolved. Taking Instagram photos with the background of exhibitions is a plus!

Just next to the Open Port Area, there is China Town, where you can experience the Chinese influence on the city and feel as if you are in China! There are also many good Chinese restaurants where you can try the Korean version of Chinese Food, such as Jajangmyeon (a noodle dish topped with a thick sauce made of chunjang), Jjamppong (spicy seafood noodle), and Tangsuyuk (sweet and sour beef or pork). The extravagant red color of the buildings makes the place photogenic!

Last but not least, Songwol-dong Fairy Tale Village is strongly suggested to Instagram and TikTok lovers. It is a small residential area next to China Town, where you can see the fairy tale themed decorations on every corner and wall. Have fun trying to find all 10 landmark photo spots that include fairy tale characters, such as Pinocchio, Snow White, and Spider-Man!

If you are interested in visiting the filming locations of K-dramas, movies, or K-pop music videos, book Incheon K-drama/movie Shooting Spots 1 Day Tour!

Visit Trazy.com to find out more things to do in Incheon, the city where you can meet the past and the present.

Reserve yourself a spot at KX Festival 2018