Love it or hate it, there’s no denying that the Hallyu craze has taken over our lives. Our not-so-secret hope to be in Korea is undoubtedly caused by the heart-tugging K-dramas, head-bopping K-pop bangers, and uncontrollable belly laughs made possible by our favourite K-variety shows.

Of all the notable directors in Korea, there’s one that has broken boundaries with his exceptional work that has won praises from critics all over the world. And that’s none other than director Yeon Sang-ho. Read on to find out more about the crème de la crème of the industry.

1. He will be making his first Netflix debut with Hellbound You read that right! Hellbound is directed by the one and only Yeon Sang-ho. This visually striking and shockingly appealing story structures series tells the story about otherworldly beings who appear out of nowhere to issue a decree and condemn individuals to hell, which was adapted from his unique webtoon of the same name.

2. Train to Busan runs over millions of hearts in Korea Have you been wondering why Director Yeon’s name sounds oddly familiar but you can’t seem to put your finger on it? Well, that’s because Yeon Sang-ho is the director of the infamous movie Train to Busan! Did you also know that Train to Busan is the first South Korean movie to reach 10 million viewers in Korea in 2016? Well, now you do.

3. His degree had nothing to do with what he’s doing now… … but, it still has something to do with the creative industry! A little monster told us that Yeon Sang-ho graduated from Sangmyung University with a degree in Western Painting. Imagine all the thrilling shows and movies we would have missed if he didn’t answer his calling in the entertainment industry. However, it may be quite interesting to see some of his artwork now, wouldn’t it?

4. He has won as many awards as there are letters in the English Alphabets system! 26. We’ve counted with our fingers and toes (and borrowed a friend’s too). Since 2012, Director Yeo Sang-ho has had 26 award wins in his name! His accolades include Best Director, Best Feature Film, and Best Horror Film in the Toronto After Dark Film Festival, the New Director Award in the Korean Film Actor’s Association Awards and the Baek Sang Art Awards, and many more.
Excited to check out Director Yeon Sang-ho’s work? Catch Hellbound on 19 November, exclusively on Netflix. 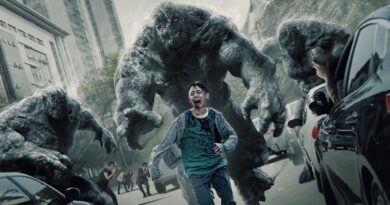 HELLBOUND Launches on Netflix This 19 November