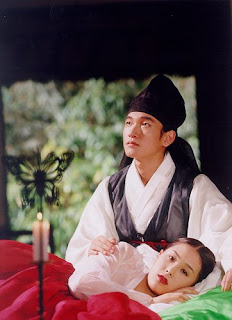 I watched this movie ages ago but I can never get the story out of my mind.

It’s one of the most simple and meaningful romance tales out there. No – cringing please stop that already! – moments here. Just good ole’ fashion romance with lovely cinematography and a story that just warms the cockles of my heart. Well, except for that physical abuse bit at the end, but nothing us 21st century moviegoers can’t handle.

However, if period romances aren’t your thing, the comedy, My Sassy Girl, is a modern take on this traditional folktale.

Set in 18th century Korea, Chunhyang is a tale told in pansori, a form of Korean opera where the story is narrated through song. It is about a young nobleman, Mongryong, who falls in love with the spirited and willful daughter of a retired courtesan, Chunhyang. The two lovers marry in secret for Mongryong’s parents would never approve of such a union. Unfortunately, Mongryong is forced to leave the village to continue his education in Seoul but promises to return to her after graduating as a government official.

A new governor is appointed to the village and soon has eyes for Chunhyang. Chunhyang, devoted to Mongryong, refuses the new governor’s advances and suffers torture and imprisonment. Will Mongryong return in time to save his love?

Get the DVD, but it could be a difficult find.