Hey the K-popped! Trio loves Converse! After our recent trip to Seoul, we have become fans of the shoe brand.

After walking so much, we needed really comfortable shoes. We noticed that many locals had on Converse and they looked really comfy. As the saying goes, when in Rome, do as the Romans do right? So we bought them.

Converse all the way: (l-r) It’s Chuck Taylor All Star for Rooster and Liz
while Orchid goes for the 1HUND(RED) Artist #55 Carson Ellis design

When we left Seoul, we had four pairs of Converse shoes between the three of us ;-).

They are excellent walking shoes!

And so I am extremely happy to report that a second Converse store (Converse Original Global Store) opened in Myeongdong, Seoul this evening.

Celebrities namely Choi Kang-hee, Marco, 2PM’s Hwang Chan-sung and Nick Khun along with Park Ye-jin were there to celebrate the event. The stars wore their Converse shoes (of course) to the ceremony. 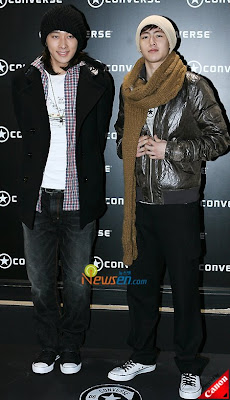 In fact, when we were in Seoul, we bought two pairs of Converse shoes at the existing Myeongdong store (a few doors down Krispy Kreme!).

We had a very memorable visit to that store…so memorable that Orchid wanted to visit it again, and again….Hee hee, but that’s Orchid’s story to tell so I won’t say anymore.

Converse rocks! Do you own a pair of Converse?