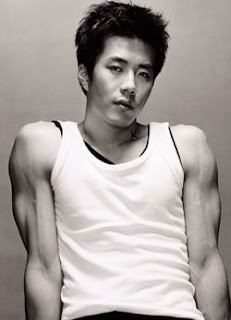 It’s about time we profiled Kwon Sang-woo because his popular works are being shown on local TV. With his model good looks and onscreen charisma, it’s little wonder that Mr. Kwon is the most wanted actor in Korea. The 31-year-old modelled before embarking on an acting career. He was noted for the popular flick My Tutor Friend, which was released in 2003.

His popularity increased tremendously when he starred opposite Choi Ji-woo in Stairway to Heaven, one of the most popular Korean dramas to date.

In 2004, he tackled the role of a Catholic priest in Love So Divine. During an interview to promote the flick, Mr. Kwon revealed that his mother is a Roman Catholic and that he was encouraged by friends to be baptised. He also added that his mother was helping him study the Christian faith.

Sometimes, the price of fame can be a pain in the @$$ and Mr. Kwon sure knows a thing or two about that. Earlier this year, an entertainment manager who is linked to an organised crime ring was arrested for threatening the actor.

The tai kor (Cantonese for “gangster”) demanded exclusive rights over the actor and wanted to force him to participate in a fan meeting. Also, the management owed money to the actor and even extorted 800mil won (RM2,978,149) from Mr. Kwon and another actor by threatening to air their dirty laundry in public.

Anyway, Mr. Kwon is back on his career track (yay!) and was last reported to be in the midst of filming Fate. He is also planning a promotional tour of China, Japan and Southeast Asia. (Come to Malaysia, Mr. Kwon. We’ve got great…er, FOOD, yeah! Satay’s on me ;-P)

On July 18, Kwon called for press conference on short notice to announce his marriage to actress Sohn Tae-young. The couple have set their wedding date on September 28, 2008.


An Interview with Kwon Sang Woo