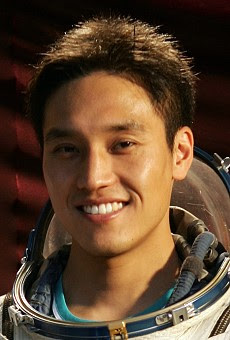 Spaceman: Ko San, Korea’s 1st astronaut will not
be leaving home without kimchi

Korea’s national dish kimchi, along with hunky Korean cosmonaut Ko San, is set to blast off into outer space on April 8!

The 32-year-old computer science engineer, who beat 36,000 contestants for a spot on board the Russian–made Soyuz rocket, will be carrying the beloved Korean dish with him.

Korea’s first astronaut plans to share the specially-made kimchi with fellow spacemen onboard the International Space Station. He will be preparing a Korean dinner on April 12 to celebrate the 47th anniversary of the day Soviet cosmonaut Yuri Gagarin became the first human in space.

Much research went into Space Kimchi to make it bacteria-free.

Space food: Want to try something that’s just out of this world? Try Space Kimchi!

On Earth, kimchi is teeming with harmless microbes and lactic acid bacteria as it helps with fermentation. However, scientists fear that the microbes could turn dangerous in space as cosmic rays and other radiation might cause them to mutate.

The challenge was to produce bacteria-free kimchi. The Korean Atomic Energy Research Institute worked on the project since 2003. The result? Space Kimchi, which retains the original taste, but without the bacteria. Also, the pungent smell of the dish is reduced by “one-third or by half.”

Kimchi is set to go where it has never gone before – to infinity and beyond!