Will Kim Ah-joong don the fat suit again? We aren’t sure. But what we are sure is that there will be a sequel to the 2006 rom-com, 200 Pounds Beauty. 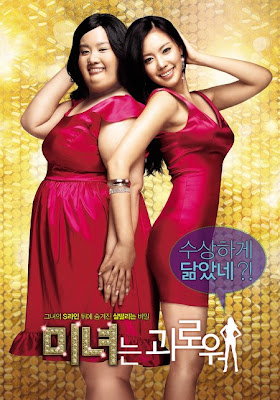 Coming soon: A sequel to 200 Pounds Beauty is
in the works

In the original movie, we saw an overweight songbird named Hanna (played by Kim Ah-joong) undergoing full-body plastic surgery to realise her dream of becoming a famous star. It worked, but along with it Hanna had to deal with weighty (sic) issues about who she really is as a person.

Production house KM Culture has announced that it will be making a sequel to 200 Pounds Beauty and scribe Lee Han – who penned the drama Bodyguard – is writing the screenplay.

This time around, Hanna will pile on the kilos again, no thanks to the “yo-yo syndrome”. She then tries to lose the weight she gained but eventually decides to focus on her singing and not her body.

Plastic beauty Kim Ah-joong, who brought the character to life in the first movie, has shown interest in reprising her role. However, the cast has not been confirmed yet.

200 Pounds Beauty made it to Malaysian cinemas last year (June 7, 2007 to be exact), that’s a major achievement.

A movie industry insider once told K-popped! that typically, Korean movies tend to flop at the local box-office. Thus, the scarcity of K-flicks in local cinemas since there is a lack of buyers.

Only K-movies that are really good, or one that generates a lot of buzz make it to the big screen in Malaysia.

Stars at the 45th Daejong Awards in Seoul