K-popped! goes to Genting Highlands again! We were there for the MTV Asia Awards 2008 earlier this month, so what warrants another visit? 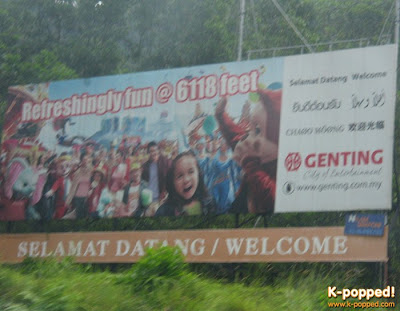 City of Entertainment: On the road to Genting Highlands…again

No, we didn’t develop an addiction to the casinos on our last visit. We were there for Dreamz, a stage extravaganza of technicolour body-hugging costumes, illusions and a white lion and white tiger (more on my encounter with the magnificent beast later)!

Thanks to the Editor and small team behind the AllMalaysian Bloggers Project (AMBP), K-popped! got to enjoy the show last Saturday (Aug 23). 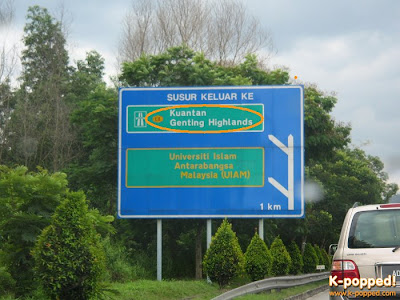 Orchid was the designated driver for the trip and we made our way up the mountain on a gloomy afternoon. It was easy getting to Genting Highlands as there were many road signs along the way. Apart from that, we saw a billboard for the Dreamz extravaganza along the highway. 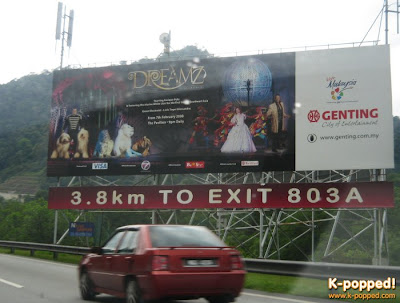 Show: Don’t forget to take Exit 803A for a night of Dreamz

We decided not to drive all the way to the top of the mountain. Firstly, it would put a strain on the car and secondly, why drive in the pouring rain negotiating dangerous bends when we can relax in a suspended little box while enjoying the view of a tropical jungle?

So we took the Genting Skyway – the world’s fastest and South East Asia’s longest cable car system. A return ticket on the cable car costs RM10 per person. 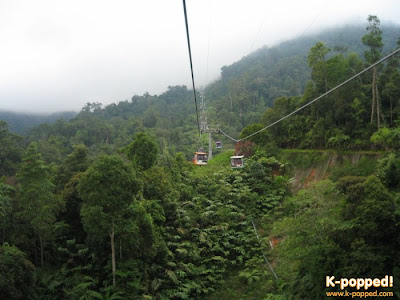 Cool air: Overheard in the cable car, ‘Your lungs aren’t
used to the clean, fresh air.’ 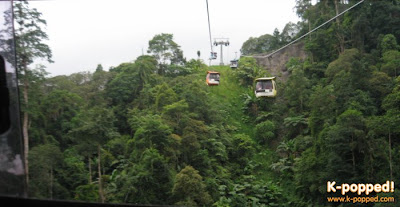 Lush jungle: Overheard in the cable car, ‘Do you think we’ll die
if the cable snaps and we fall? The foliage will break our fall
so we’ll probably just get broken bones.’ 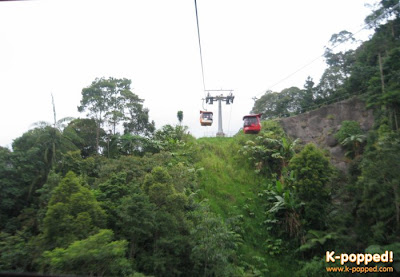 Moving on: Overheard in the cable car, ‘What are the steps on the
ground for?’
Reply: ‘You know, if the car drops, we can just continue walking
down to the station.’

Parking at the lower station located at Gohtong Jaya is free…no matter how many days you leave your car there. Finding a space at the covered carpark can be a challenge. 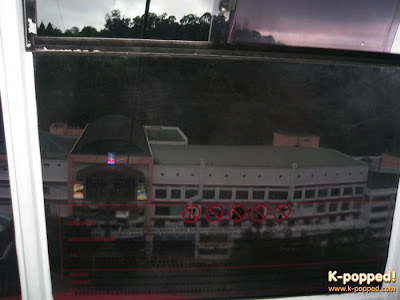 If you are driving there for the first time, getting to the Skyway Station can be a little confusing since there are no clear road signs.

Orchid kept bugging me about the road signs until I had to go, “Look Orchid, there’s only one road up and down the mountain. Relax, we have not reached the cable car station…or even Gohtong Jaya (where the station is located).” 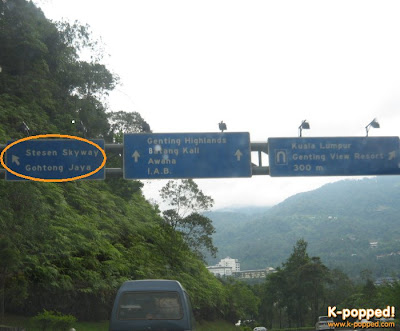 Stay alert:…and look out for the signboard above. You need
to take the road on the left. 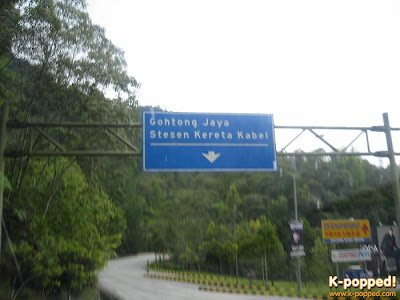 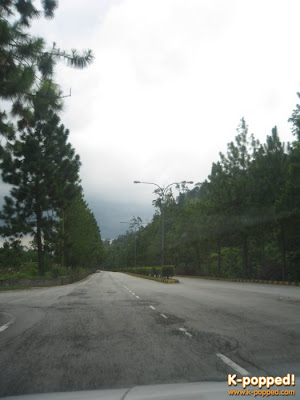 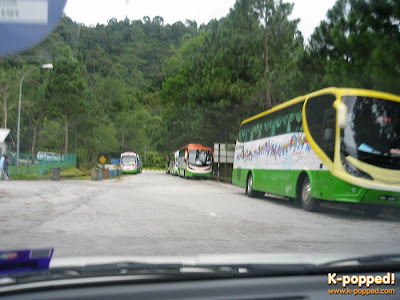 Bus rides: Many bus companies offer a bus + cable car
package up the mountain. And I know one that costs only RM6.80!

Actually, Orchid’s fear of missing the station is valid since a friend who drove up in another car missed the turning and had to backtrack down the mountain again.

The cable car ride from the lower station to the upper station located at Highlands Hotel took 15 minutes. Halfway through our ride up, it rained heavily, so we couldn’t see much of anything.

After collecting our Dreamz tickets, we decided to kill time by trying out a couple of rides at the indoor theme park since the outdoor park was closed because of the rain. 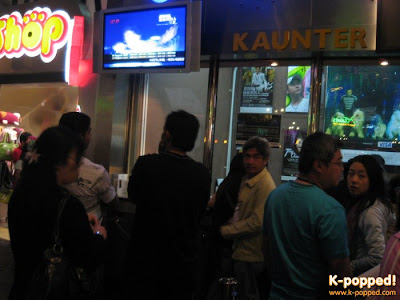 Collecting tickets: Getting our Dreamz tix 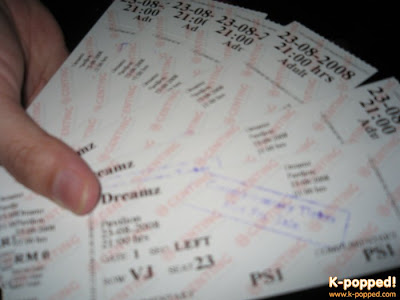 Three of us took the Euro Express – the indoor “roller coaster” – because it seemed to give riders an adrenaline rush (lots of screaming and such). We were duped.

The first sharp corner was a thrill, but after that, it was pretty much of the same thing. We could have done our nails while rounding a corner. Apart from that, the ride was a real quick one. Once the train leaves the station, it returns before you can say “Usain Bolt”. Well, it felt that way since it was only a 2 minute ride! 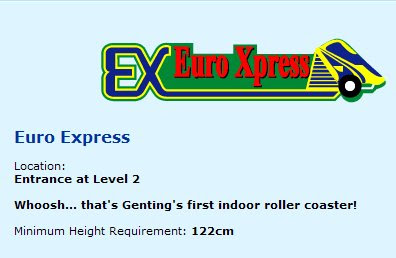 Euro Express: A ride only the kids will enjoy. – Pic credit Genting

We should have known better since children above 122cm were allowed on the ride :-P.

After that, it was the 4D Motion Master where, in the brochure it says, “feel the tickling at your feet, wind blowing to your face, & water mist spraying onto you.”

Whoo hoo! But there wasn’t any tickling of feet or mist on body, just lots of air being blown at my face. Look! A knife is being thrown at you! – sssprt – a spurt of air. Look! A dragon is breathing fire at you – ssssSSPPpprttt – another spurt of air! Look! A headless skeleton is taking a swipe at you….ah, you get the idea. 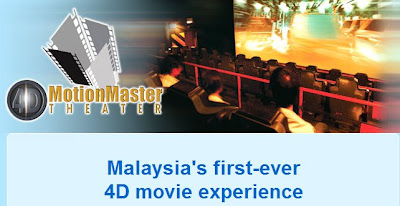 Also, the polarized 3D glasses gave me a headache after the 8-minute feature. My friends were complaining about the animation – it was such a throwback to the 80s. We watched the Enchanted Castle. (All pay per rides at the Indoor Theme Park costs RM8).

Honestly, it wasn’t a top notch showcase. It was a hodgepodge of dancing, illusions, daredevil stunts and acrobatics. But that’s expected, since it was at…you know, Genting. 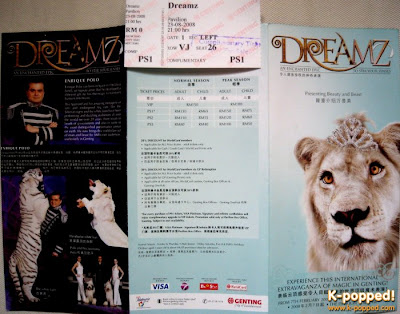 Stars of the show: The elusive white beasts

The Globe of Death motorcycle stunt had me holding my breath and saying a prayer for the stuntmen. FOUR men on motorcycles in the globe…and the globe separated into two while they were riding in it at full speed?!? You’ve gotta be kiddin’ me!

Then there were the Hua Chen Acrobatic Troupe who impressed with their flexibility and precision. 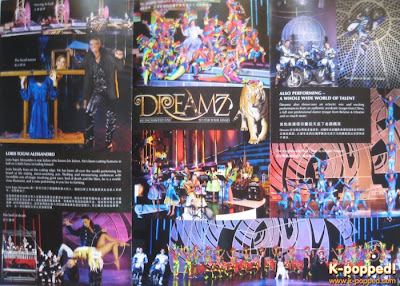 Hodgepodge: The various performances on stage

And then of course, there were the elusive white lion and tiger at the beck and call of their Spaniard trainer Enrique Polo.

After the show, the audience could take pictures with the tamer white tiger for RM80 a pop. The rather naughty white lion was kept in his cage, but I think you can pose by the cage if you want.

I have no pictures of the show since we were prohibited from taking pics and none of us felt like forking out RM80 for a snapshot with the white tiger.

Speaking of the white tiger, a few of us managed to get within a couple of inches of the beautiful beast. He took my breath away. 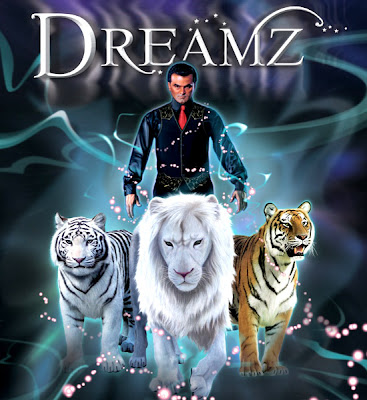 Lion tamer: Enrique Polo walks among the lion and tigers

Of course, the tiger was in a cage. He (I’m not going to call him “It” because he’s magnificent) was being wheeled out by the workers for a promo stint (ha ha) at the open stage at the Indoor Theme Park.

While I was actually in the middle of taking pictures of my friends, I was too surprised by the encounter that I totally forgot to take a pic of the white tiger. Sorry readers, I was spellbound. There was something ethereal about being so close to a white tiger.

After the Dreamz extravaganza ended at 10.30pm, we walked aimlessly for a bit (OK, we were looking for the toilets) before taking the cable car ride back to the lower station and driving the one and a half hours back to Kuala Lumpur. 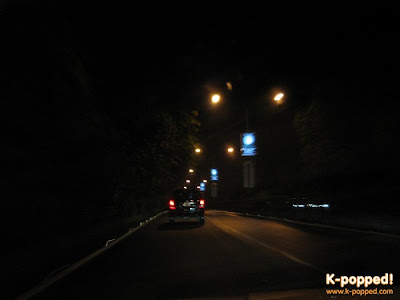 Downhill: Orchid deftly negotiates the dangerous bends while
driving home. Overheard in car: ‘Wah, if I put my car in the
higher gears, it feels like flying.’

Dreamz has been showing at the Pavilion in Genting Highlands since Feb 7, 2008. It’s on every night at 9pm (wow, must be so taxing on the performers. 수고 하셨습니다! – Thanks for the hard work!) but the show ends tomorrow (Aug 31).